In this post I go through the algorithms presented in the groundbreaking AlphaGo Zero paper using pseudocode. The objective is to provide a high-level idea of what the model does.

Last week, Google DeepMind published their final iteration of AlphaGo, AlphaGo Zero. To say its performance is remarkable is an understatement. AlphaGo Zero made two breakthroughs:

That is, it was able to achieve a level of performance way above current human world champions by training from scratch with no data apart from the rules of the game. Go is considered the most complex board game we’ve got. It’s much harder for machines to do well in Go than in chess (which is already hard).

At its core, the model chooses the move recommended by Monte Carlo Tree Search guided by a neural network:

The Monte Carlo Tree Search serves as a policy improvement operator. That is, the actions chosen with MCTS are claimed to be much better than the direct recommendations of the neural network

This high-level description abstracts away most of the information – we will now delve into MCTS and the training of the neural network to see how the model learns.

This section is more complex, so I will explain the algorithm in words before showing the pseudocode. Here’s the outline:

And here’s the pseudocode: 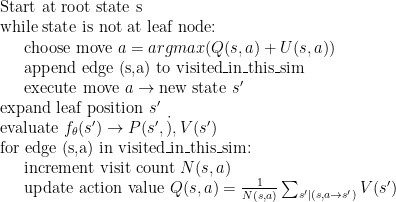 In the last line, the action value for each edge

is updated to be the mean evaluation

was reached after taking move

After this, the model chooses an action to play from the root state proportionate to its exponentiated visit count

Finally, we will look at the neural network that the MCTS uses to evaluate positions and output probabilities.

The model does two things in parallel. In the first thread, it gathers data from games it plays against itself. In the second thread, it trains the neural network using data from the game it just played. The processes are synchronised: when game

is being played, the network is being trained on data from game

. The network parameters are updated at the end of each iteration (each game). 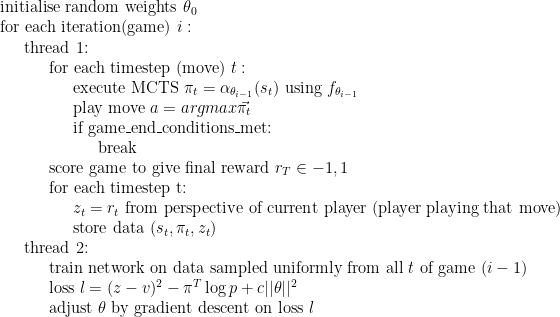 is a sum over the mean-squared error (MSE) and the cross-entropy loss, where

is an L2 parameter to prevent overfitting.

That’s it! Let me know if you have any questions or suggestions in the comments section. You can read the original AlphaGo Zero blog post and paper here.